When you turn UFW on, it uses a default set of rules that should be fine for the average home user. In short, all incoming connections will be denied, thus protecting the system from intruders. To turn UFW on:

# ufw enable Firewall is active and enabled on system startup

Once enabled, you are done! All future incoming connections will be denied. This configuration will be reloaded at boot.
You can easily view the status of ufw:

If you are interested in seeing what UFW did, then run the following command to output the current UFW rules that are applied to your iptables. While it looks like UFW has done a lot, most of this is benign. UFW basically sets up a framework in order for it to easily add additional rules in the future, as well as faciliting logging.

This is the rule in the INPUT chain above that drops incoming connections:

You may want to install gufw. It is a graphical user interface for UFW that provides an easy and intuitive way to manage your Linux firewall. It supports common tasks such as allowing or blocking ports. There is a status switch that can be turned on and off, which basically performs the commands “ufw enable” and “ufw disable“. 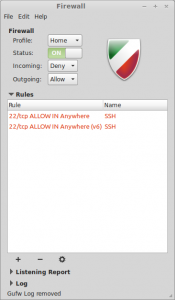 Configure Ubuntu to output more verbosely to the screen at boot.

# How long to time out showing blank screen. Commenting this out or setting no value # after the = sign means the menu will be displayed for the number of seconds # designated by GRUB_TIMEOUT. #GRUB_HIDDEN_TIMEOUT=

# Setting to false means grub menu will be displayed GRUB_HIDDEN_TIMEOUT_QUIET=false

to create a new /boot/grub/grub.cfg file.

Unfortunately, I failed to solve this issue, but I got around it.
Initially I downloaded RSSOwl for Linux (64 Bit) from here: http://www.rssowl.org/download. However, I would start to get the error message:
Error Creating Browser: RSSOwl was unable to create a browser for reading news. Please refer to the FAQ for further help. Click 'Ok' to open the FAQ now..
This issue is described in RSSOwl’s FAQ (http://www.rssowl.org/help#item_6j). However, following those instructions did not resolve my problem. Ultimately I downloaed the Ubuntu 64-bit Debian package from here: http://www.ubuntuupdates.org/package/getdeb_apps/precise/apps/getdeb/rssowl. Executing that installation of RSSOwl did have this problem.

If you already have Ubuntu packages of JRE and/or JDK already installed, then you may leave them installed. However, you must uninstall IcedTea. The IcedTea project provides a harness to build the source code from http://openjdk.java.net using free software build tools and adds a number of features to the upstream OpenJDK codebase.

Download Java from Java’s website: http://www.java.com. For 64-bit you want Linux x64 (the file name ending with x64.bin). In this example we downloaded jre-6u31-linux-x64.bin.
Then make a directory for Oracle Java. Move the downloaded file into this new directory:

This will create the directory /opt/java/jre1.6.0_31 containing your new instance of Java. Its name will match the version of Java downloaded. You may now delete the downloaded Java installation file:

Tell the system that there is a new instance of Java available:

Tell the system to default to the new Java instance:

Verify your system is now using this instance of Java:

Here is an example /etc/apt/sources.list file for Ubuntu Hardy:

When using curl, you may receive the following error message if you are missing the CA certificate in the directory tree /usr/local/share/ca-certificates/ for the site you are trying to connect to:

user@hardy:/tmp$ curl https://example.com curl: (60) SSL certificate problem, verify that the CA cert is OK. Details: error:14090086:SSL routines:SSL3_GET_SERVER_CERTIFICATE:certificate verify failed More details here: http://curl.haxx.se/docs/sslcerts.html curl performs SSL certificate verification by default, using a "bundle" of Certificate Authority (CA) public keys (CA certs). The default bundle is named curl-ca-bundle.crt; you can specify an alternate file using the --cacert option. If this HTTPS server uses a certificate signed by a CA represented in the bundle, the certificate verification probably failed due to a problem with the certificate (it might be expired, or the name might not match the domain name in the URL).

The easiest way around this is to turn off curl’s verification of the certificate, using the -k (or –insecure) option. However, the best way is to add the associated CA certificate to your system by following these directions: Adding Additional SSL CA certificates.
On Ubuntu Hardy, curl is compiled to use the file /etc/ssl/certs/ca-certificates.crt. You will see the following when executing curl against a site using HTTPS:

On Ubuntu Lucid, curl is compiled to use the CA certificate directory /etc/ssl/certs/. You will see the following when executing curl against a site using HTTPS:

You can override this with the –ca-cert or –capath options.

Then add your CA certificates to this directory. These files should have a .crt extension (e.g., my_ca.crt). Then append a line for each certificate you add to the configuration file /etc/ca-certificates.conf (e.g., “added/my_ca.crt“). Finally, run